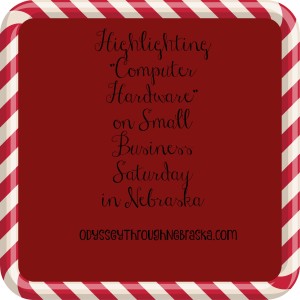 Bargains.  I found my share yesterday when I went Black Friday shopping.  While most of my deals were admittedly found at the “big box” stores, one of my shopping stops stood out as being one of the best due to one aspect.  Service.  Not that I faced crabby clerks anywhere else, because people were remarkably nice despite the long lines.  But when I stopped by the Computer Hardware store in Lincoln, the experience was still friendlier.

We have been needing a new charging cord for my phone.  For the past several weeks, my middle son and I have been sharing one.  Yep- that has gone about as well as you can imagine.  I have driven by the centrally located Computer Hardware store for years.  Until I stopped in yesterday, I did not realize that they are actually Apple certified.  And locally owned.  What they carry is similar to what you would find in bigger stores.

Originally I just planned on buying a “certified” cord, but instead I was pointed a different direction.  I left with a “Tech Armor” cord that has a lifetime warranty for the same price that actually seems like it will last longer than a few months.  Could I have spent less at a “bigger” store?  Possibly.  Yet I am certain that I would have left with an inferior product.

The other fun thing is that they were serving Eileen cookies and “Scooterdoodle” coffee.  Yum!  That definitely brightened the afternoon of this tired shopper.  Not only is Computer Hardware found in Lincoln, but also in Hastings, Grand Island and Kearney.  I know that I will definitely stop by their store again the next time that I am in the market for Apple products.

For other small businesses across Nebraska that deserve a “shot” at your business, please check out my other posts under “ABC (Agriculture, Business, Commerce) Across Nebraska.