Almost every little kid loves to see big machinery.  At least I know that when our four kids were little they would get pretty excited about seeing different large vehicles driving by.  Getting to see them up close and personal did not happen as often as they would have liked.   Opportunities were limited.  This is not true tomorrow in Lincoln.  Children of all ages will have the opportunity to see all sorts of vehicles on display.  The rest of the information below is directly from Lincoln Children’s Museum who is hosting the largest “Tractors, Trucks, Planes and Trains” event this area has ever seen. 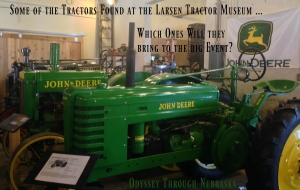 The event, sponsored by AuctionTime.com, will be held from 10:00 a.m. to 1:00 p.m. on Saturday, August 20th on the West side of the airport grounds via NW 48th St. The large space, which is best known for hosting the Guardians of Freedom Air Show, is needed to host the over 30 giant machines that will be on display for the experience. Children of all ages are invited to see their favorite vehicles up-close and even ride a mini train or two. Tickets are $5 for Museum members and $7.50 for non-members and are available at LincolnChildrensMuseum.org.

The event has much more to offer families outside of just wheels and wings. Old car seats can be brought to be recycled for free by Tracy’s Collision Center. MilkWorks is hosting a tent for nursing mothers with changing tables. Nebraska State Patrol will be doing child fingerprinting as part of their child safety and awareness initiative and seat belt convincer demonstrations. Operation Lifesaver, Safe Kids, Golden Spike Tower and other organizations will have information and free goodies to promote safety education.

My family is quite excited to attend tomorrow, and we appreciate the tickets that were given to us by the Lincoln Children’s Museum.  I will be posting pictures of some of our favorite machines on my Nebraska Odyssey Instagram if you are unable to attend in person.  Should be a beautiful August Saturday in Eastern Nebraska!